Earlier today I asked if yesterday, March 11, 2020 was the craziest day in sports history. I was very wrong. Today, March 12, 2020 has easily overshadowed yesterday with the cancellation of Sport.

Every single Sport you can think of has been cancelled, suspended, or is done for the foreseeable future, with the exception of UFC and NASCAR (for now). Earlier today, NCAA March Madness along with all NCAA Winter & Spring sports have been cancelled for the remainder of the academic year. 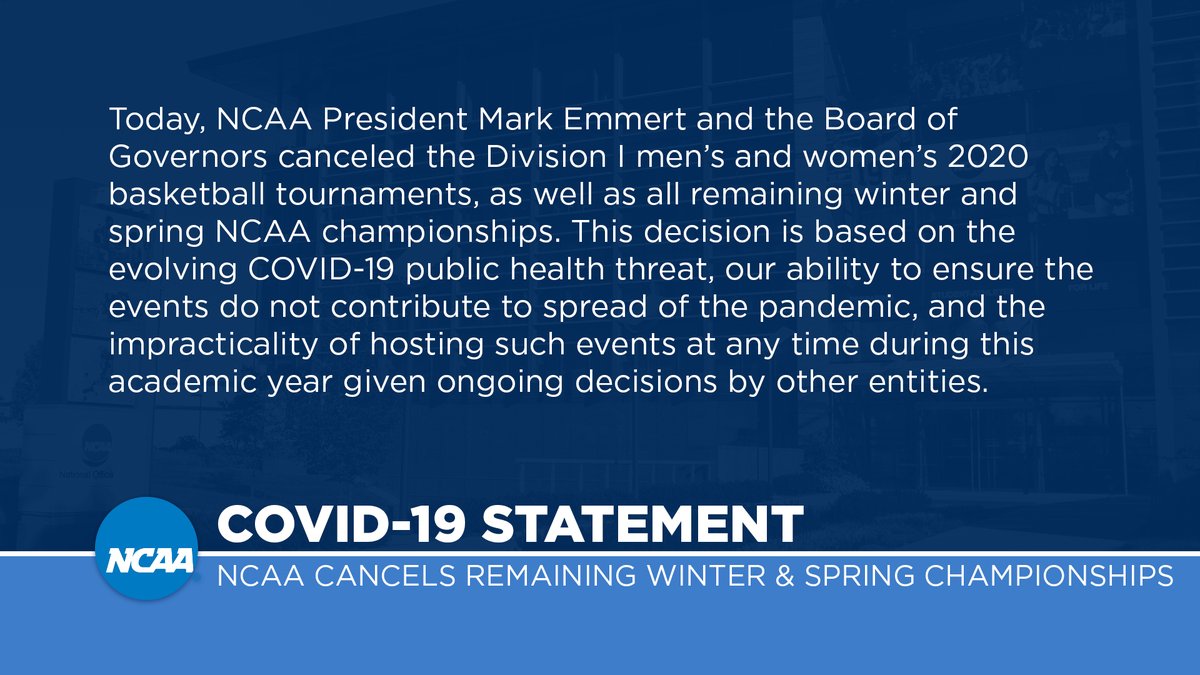 NBA has continued to be suspended as I wrote about earlier, but with an update that Rudy Gobert infected his teammate, Donovan Mitchell with Coronavirus while carelessly touching everything in the locker room.

NFL has stated they are planning to start the league calendar on schedule (March 18), but many organizations have pulled their staff and scouts off the road immediately.

Official statement from the Panthers pic.twitter.com/8o33WwSc59

The NFL has also announced the cancellation of some other meetings and smaller combines.

A statement regarding the HBCU and Regional Combine Invitational: pic.twitter.com/viEGIjKDMs

NHL has suspended their season for the time being.

PGA just announced they will be cancelling The Players Championship this weekend.

Breaking: The PGA Tour announced it has canceled The Players Championship. pic.twitter.com/g1WgeycF5h

MLB has cancelled the remainder of Spring Training and pushed back Opening Day 2-weeks.

MLS has suspended their league operations for 30-days.

UFC President @danawhite joined @SportsCenter to confirm reports that #UFCBrasilia will take place in an empty arena with only “the staff that’s running event."

He added that #UFCLondon "will proceed as planned" and #UFCColumbus be moved to the UFC Apex facility. pic.twitter.com/IqjcvWdXEO

NASCAR is also still a go for this weekend in Atlanta but with ZERO fans in attendance.

It is terribly sad for the NCAA student-athletes that had their seasons ended abruptly in all sports impacted today, especially the seniors. With the NCAA being such a different beast from these professional leagues there is no possible way for these seasons, post seasons, or tournaments to be salvaged or made up in the future. The record books in the NCAA will be awfully empty for the year 2020.

This is something so unprecedented we are seeing with not just the sports world standing still but the entire world coming to a stand still. Not since September 11, 2001 have we seen anything like this. I even asked my Dad, if her had seen anything in his lifetime that made the world stop, he said JFK assassination would be the closest but he was a baby and nothing compared to what we witnessed today.

If the Coronavirus is able to be taken under control, we may be seeing a very busy summer of professional sports. MLB, NBA, NHL, & MLS all in season at the same time during what is usually the most boring time on the sports calendar.