Due to the recent news that the NCAA canceled all Winter & Spring sports for the remainder of the academic year, this leaves many sports, programs, and seniors with unfinished seasons and careers cut short. Leaving many seniors not getting the chance for a senior night in multiple sports. 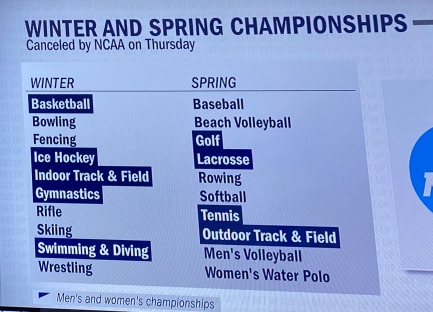 The implications that lie ahead when considering a move like granting a special exception like an additional year are more than one would think.

In these circumstances of a medical redshirt, programs might save a scholarship for a player in that situation, but each program is very different.

If the NCAA were to grant a one-year exception to the rule for all senior athletes to have the option of coming back for an additional season, there would be a chaotic imbalance of parity throughout the nation in all Winter & Spring sports.

Let’s use Women’s Gymnastics or Men’s Basketball as an example as they both are a headcount sport (meaning only 12 student-athletes on roster can have a scholarship at any time from $1 to full tuition) of 12 scholarships. Let’s take a look at this comparison:

Geno Auriemma is in favor of granting an extra year of eligibility to seniors, along with Jay Bilas, but does recognize the major implications on this decision.

Geno Auriemma is in support of offering the seniors of spring sports an extra year of eligibility.

What about a basketball program like Southeast Missouri State University in the Ohio Valley Conference, whose season ended February 29th, that is completely unaffected by this NCAA Winter & Spring sport cancellation. Do the seniors on a team like that get an extra year, because other teams in the Nation would get additional eligibility?

A major complication in this scenario is you would have to open up the transfer portal for any incoming freshmen… What about the many incoming freshman that were promised and excepted to starting spot at their position their first year… Are they now able to transfer with no penalty?

If the NCAA were to go through with this unprecedented decision they would have to fund all additional scholarships and many other additional expenses themselves. There are 347 Division I Universities, of that 130 of them make up the FBS Subdivision, while there are 217 other Universities that are in the FCS Subdivision. Majority of the Universities at the FCS level do not have any type of lucrative TV broadcasting or apparel deals. These athletic departments and programs have to pay extensive amounts of money out of their budgets to field a certain number of student-athletes on a roster. Will the NCAA fund the extra apparel, meals, travel accommodations, along with the additional scholarships that raising the scholarship and roster counts would entail?

There are so many uncertainties in a situation like this. I do not see something like this being fairly implemented at such a large scale, and having next year’s Winter and Spring sports compete on an even playing field. The NCAA would have to fund all the “little guys,” you never hear about to keep their programs and athletic departments from going under and cutting programs.

The NCAA has announced that they will grant an additional year of eligibility for all Spring sports, additional issues and rules will be discussed in the coming days and weeks.

There is going to be a definite need for major extensive funding for these Spring sport program budgets. The NCAA seems to be discussing the option of Winter sports doing the same or similar.